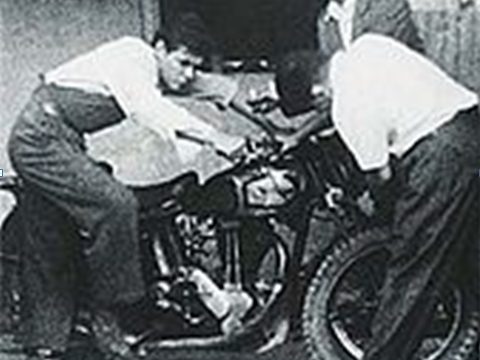 In the 1960s Honda produced a very successful marketing slogan “You meet the nicest people on a Honda”. This was made possible as Honda fitted an electric start to oil tight motorcycles and in doing so opened a new market, which included ladies.

Arriving at the Waresley Garden Centre earlier this week, Mick Ward was in conversation with a gentleman. Introducing myself he explained he was Argentinian and that Mike’s Norton was the same as that used by Che Guevara in his epic tour of South America in the 1950s. So Norton’s could have used the slogan ‘Norton’s are ridden by interesting people’. A few years ago I researched Che and thought some recognition of his motorcycling and political achievements will be of interest.

Che (Ernesto) was a 23 year old medical student in Buenos Aires.
With his friend Alberto Granado (Biologist) on the back of a spluttering 1939 500 Norton dubbed La Ponderosa (“the mighty one”) they decided to Explore the South America they knew only from books.

The trip of over 5000 miles taking 9 months across such places as the Andes, Amazon River basin and the Atacama Desert transformed Che, born into an upper middle class family, into a Socialist revolutionary displaying a willingness to fight and die for the poor and to achieve his dream of a united South America.

South America in the 1950s was a dangerous and lawless place. Che and Alberto relied upon the hospitality of strangers throughout the entire journey. Breaking down they flagged a lorry to take them to a town where the Norton could be fixed, Locals provide accommodation and hospitality. They were not interested in meeting dignitaries, the wealthy or tourists preferring to meet those in police custody or strangers they meet on route. In this way Che saw first-hand the poverty and deprivation suffered by the native populations.

They were robbed, arrested, beaten up, shot at and imprisoned. Crossing into Chile they introduced themselves as internationally recognised Leprosy experts to a local newspaper. This led to free meals and accommodation with locals and to work in the Leper colony at San Pablo. Here the Doctors lived on one side of the river, the colony on the other and rarely meeting. Che regularly swam the 2.5mile wide river to spend time with the sick recording in his diary: “All the love and caring just consists on coming to them without gloves, shaking their hands as any other neighbour and sitting together for a chat”.

After treating patients for a few weeks they left for Columbia aboard a raft made for them by the Lepers and able to take the Norton. Here they found more oppression and less freedom than anywhere else so far. To be arrested was to be beaten and tortured. A revolution was brewing and in 1953 civil war broke out.

Che then decided to return to Buenos Aires and recorded in his diary: “We are looking for the bottom part of the town. We talk to many beggars the unemployed, disadvantaged and our noses inhale their misery”.

Unable to arrange transport for the Norton to Easter Island they rode north moving into mining country. They visited the vast copper mines the principle source of Chile’s wealth and owned and run by USA mining companies. A chance meeting with a homeless couple in search of work made a particularly strong impression on Che who wrote “By the light of the single candle …the contracted features of the worker gave off a mysterious and tragic air…the couple frozen stiff in the thin night air hugging one another were the living representation of the capitalist system”.

Witnessing widespread poverty, oppression and corruption throughout Latin America Che decided the only solution was armed rebellion. From his diary “Revolution without firing a shot.  You must be crazy”.

Che arrived in Mexico City in 1954, and worked in the General Hospital and became obsessed with an elderly washerwoman whom he was treating, remarking that he saw her as “representative of the most forgotten and exploited class”.

During this time he renewed his friendship with Cuban exiles he had met in Guatemala meeting Raúl Castro, who introduced him to his older brother, Fidel Castro who was plotting to overthrow the dictatorship of Batista. During a long conversation with Fidel, Che concluded that the Cuban’s cause was the one for which he had been searching and before daybreak he had signed up as a member.

Che underwent arduous 15-hour marches over mountains, across rivers, and through the dense undergrowth, learning and perfecting the procedures of ambush and quick retreat. From the start Guevara was “the best guerrilla of them all”.

In late 1966 Che departed for Bolivia altering his appearance by shaving off his beard and much of his hair. His guerrilla force, numbering about 50 men was well equipped and scored a number of early successes against Bolivian army regulars.

Che had expected assistance and cooperation from the local dissidents and Bolivia’s Communist Party that he did not receive. He was also unaware that the United States government had sent a team of the CIA Commandos and other operatives into Bolivia to aid the anti-insurrection effort. The Bolivian Army was also trained, advised, and supplied by U.S. Army Special

Forces, including an elite battalion of U.S. Rangers trained in jungle warfare. The two shortwave radio transmitters provided to him by Cuba were faulty; thus, the guerrillas were unable to communicate and be resupplied, leaving them isolated and stranded.

On October 7, 1967, an informant told the Bolivian Special Forces of the location of Che’s encampment who encircled the area with 1,800 soldiers. Che was wounded and taken prisoner, tied up and taken to a dilapidated mud schoolhouse refusing to be interrogated. One Bolivian officer describes him as looking “dreadful” shot through the thigh and shoulder and with his hair and clothes matted with blood. Despite this he recounts that “Che held his head high, looked everyone straight in the eyes and asked only for something to smoke.”

Later that morning Bolivian President Barrientos ordered that Guevara be killed. To make the bullet wounds appear consistent with the story that the Bolivian government planned to release to the public, it was ordered not to shoot Guevara in the head, but to aim carefully to make it appear that Guevara had been killed in action. 30 minutes before Che was killed he was questioned about the whereabouts of other guerrilla fighters, but he remained silent.

A few minutes later, Sergeant Terán entered the hut to shoot him, whereupon Che  staggered to his feet and spoke his last words:

“I know you’ve come to kill me. Shoot, coward! You are only going to kill a man!”

Che a brave and adventurous motorcyclist.