In February we heard a talk from ex BSA man Michael Martin. We heard how In 1952 BSA urgently needed to publicise their new 500cc Star Twin motorcycle. So what better way than to set the bike a nearly impossible task? They took three standard bikes, and under Auto Cycle Union observation, rode them to Austria, entered the 1952 International Six Days Trial, the Olympics of motorcycle sport in its day, won three Golds, then rode the same bikes north through Germany, Denmark and Sweden to Oslo in Norway where they undertook a speed test - all this in just three weeks and in unrelenting rain! Then they rode the same bikes back to Birmingham! This feat of endurance and reliability of both man and machine is probably still unmatched in the modern era. One of the riders was Michael’s older brother, Brian, later to become BSAs Competition Manager. 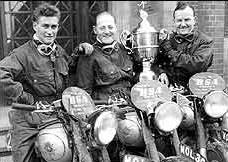